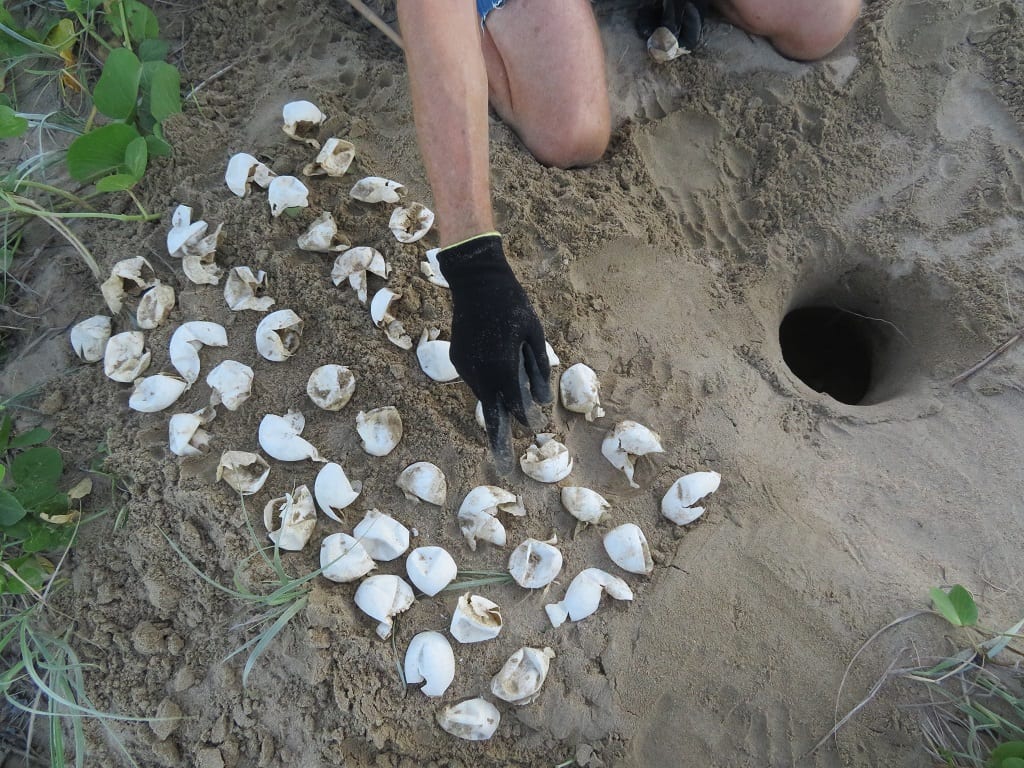 Some members of Mackay and District Turtle Watch Association are trained in ‘tagging’ turtles. When possible, turtles are given a metal tag with a discreet number that enables the turtle to be monitored over its life. This tag number is registered with the Queensland Turtle Conservation Project (QTCP), and information relating to the turtle will be updated on the database each time this turtle is seen.

Mackay and District Turtle Watch Association members monitor local beaches daily during the nesting season, from approximately mid-October through to mid-January each year. Often beaches are monitored at night, especially during favourable tide times, to watch and record nesting turtles. During nesting season, females will usually return to a beach every two weeks to lay around four clutches of eggs.

The location and date of turtle tracks and nests is recorded. If the turtle has laid, egg chambers are located and marked for their monitoring and protection. An exact location of the egg chamber is important to assist monitoring for hatchlings later in the season.

Flatback turtles lay around 50 eggs on average per clutch, and it takes the developing hatchlings approximately 50 days to hatch from their egg. After they have hatched, the hatchlings spend the next three to five days moving around inside the nest to straighten and absorb the egg yolk that becomes their energy reserve for their journey out to sea.

As the hatchlings become ready to emerge from the nest they commence moving upward from the egg chamber through the neck of the nest. Hatchlings will wait just below the surface until the sand temperature drops indicating that it is night time, which is a safer time to emerge and head to the ocean. Often hatchlings will emerge all at once and rush to the ocean as fast as possible, which gives them a better chance of avoiding predators such as birds and crabs.

Mackay and District Turtle Watch Association members will wait at least 24 hours and then excavate the nest to gather data about the successfulness of the nest. The number of empty shells, unfertilised eggs, undeveloped hatchlings, and developed hatchlings which did not emerge are counted. At the end of the season, this data is compiled and sent to the Queensland Turtle Conservation Program Coordinator for inclusion in their database.